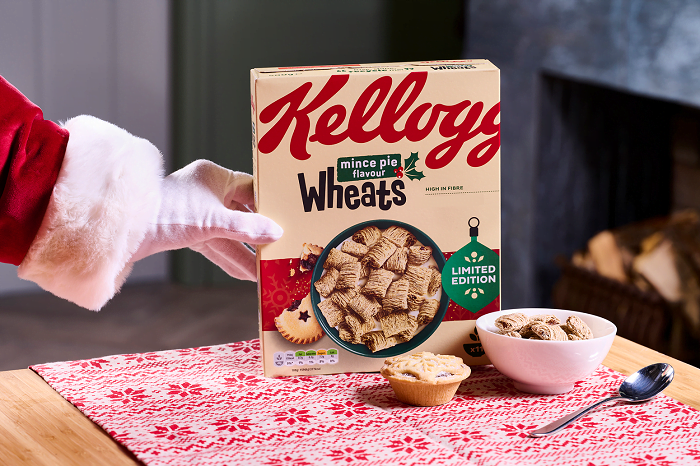 Kellogg’s has launched a new limited edition mince pie flavoured cereal to give people the chance to add a touch of Christmas spirit to their mornings. Made in… View Article

Kellogg’s has launched a new limited edition mince pie flavoured cereal to give people the chance to add a touch of Christmas spirit to their mornings.

Made in Manchester, the product’s development began just after Christmas last year to make sure it made it on to shelves in time for this year’s festive period.

Some 60,000 boxes have been manufactured which will appear in selected Sainsbury’s stores from 30 November with a recommended retail price of  £1.80. Kellogg’s said the cereal is high in fibre, low in salt and low in saturated fat.

Kirsty Smith, food designer at Kellogg’s, said: “We tried around four different recipes before we found ‘the one’. The filling in the crunchy Wheat casing is made up of sultanas, candied orange peel and a spice mix of cinnamon, ginger, all spice and nutmeg – all of which comes together perfectly to deliver that favourite mince pie taste.’’

Emily Dutton, senior brand manager at Kellogg’s, added: “Mince pies are a Christmas classic and we know just how much people love them, that’s why we wanted to combine that instantly recognisable flavour of spiced, dried fruit with our popular Wheats cereal.”