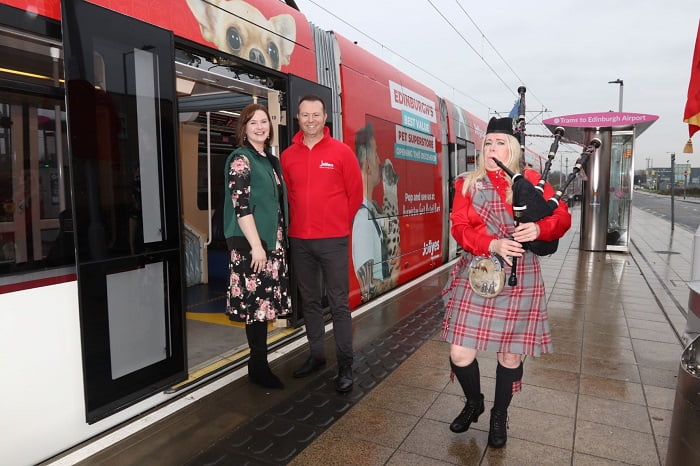 One Edinburgh’s key tram stops has been renamed as Edinburgh ‘Bark’ station for the whole of December to celebrate the opening of a debut store in the capital by pet retailer Jollyes.

In addition, one of the city’s trams has been given a pet-themed makeover to mark the opening of the store at Hermiston Gait Retail Park.

The tram has been given new livery featuring the Jollyes logo and Zeus, a pet cat owned by Kate Smith who is a member of the Edinburgh Trams team.

Jollyes is currently putting the finishing touches to the Hermiston Gait store which will officially open on 9 December. The shop is the retailer’s fifth in Scotland.

As part of its partnership with Edinburgh Trams, a special tram will leave St Andrew Square for Edinburgh ‘Bark’ station at 9.40am on the opening day. In addition, passengers will be encouraged to bring their pets on the journey with all fares being donated to Edinburgh Dog and Cat Home.

Wykes said: “When we approached Edinburgh Trams about renaming the station Edinburgh Bark they thought the idea was the cats’ whiskers. We hope it will put a smile on people’s faces.

“We’re very proud to see our name on one of Edinburgh’s iconic trams and we couldn’t think of a better way to let the people of the city know that we’ve arrived.

“We’ve worked hard to create a store the city can be proud of. It’s in a great location alongside some of the best-known brands in retailing and we hope it’s going to be a magnet for pet lovers and their pets from Edinburgh and the surrounding areas.”

Tom Neil of Edinburgh Trams added: “We hope commuters, shoppers and visitors to the city will see the funny side of the new name for the stop and enjoy seeing Zeus on his travels.”

The 7,000 square foot store will employ 16 people and will be led by store manager Angie Rennie.

Jollyes Edinburgh will have a new concept frozen raw food ‘shop-in-shop’ and a community pet clinic and grooming spa.

The retailer has invested around £1 million in Scotland this year following openings in Glenrothes and Stirling. It is also preparing to launch a new store in Llanelli, South Wales, on 10 December.

Backed by Kester Capital, Jollyes has more than 80 stores across the UK. In July, it acquired Penparc Pet Centres with five stores in the Midlands, which together with new openings in Cookstown, Wrexham, Southport, Stockton-on-Tees and Poole has accelerated its expansion.