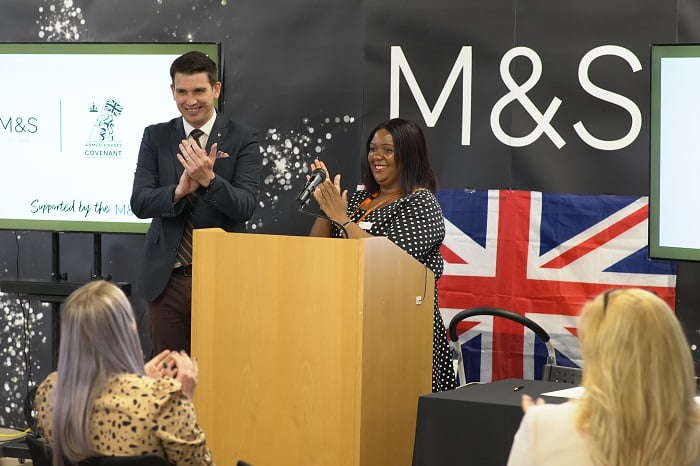 Marks & Spencer has re-signed the Armed Forces Covenant as it looks to attract more forces veterans to work in the business. Special guests including representatives… View Article

Marks & Spencer has re-signed the Armed Forces Covenant as it looks to attract more forces veterans to work in the business.

Special guests including representatives from the Ministry of Defence and the Royal British Legion joined the retailer for the signing at its ecommerce distribution centre in Castle Donington ahead of Armed Forces Day.

Seven years after its original Armed Forces Covenant was signed back in 2015, the retailer is reaffirming its commitment to be a forces friendly employer.

Paul Burns, head of operations clothing and home logistics at M&S and its Veteran’s Network sponsor, said: “We are pleased to celebrate our commitment to supporting our Veterans by updating and signing our Armed Forces covenant in Castle Donington and achieving our prestigious silver status.

“We see first-hand the benefits and skillsets that employing ex-service personnel can bring to a business day in, day out. Veterans play a vital part in sharing knowledge and experience across the M&S family, and we will continue to champion their positive role in the business.”

M&S currently employs over one thousand military veterans, reservists, volunteers and spouses in its stores, as well as in support centres in London, Salford, Chester and at the Castle Donington site.

The retailer’s support of the Armed Forces dates back to WWII when staff knitted hundreds of garments for evacuees and military personnel. More recently, M&S has been working with the Royal British Legion which is one of the retailer’s Sparks Card chosen charities.

M&S has also launched a Veterans Network for all members of the forces community within the company and their allies, which is co-chaired by veterans working for M&S and their families. The online initiative provides a safe space for members and aims to raise awareness in the workplace and support business wide activities relating to the forces community.

Heather Perkins, chair of the Veterans Network, said: “When I took on the position as the chair of the Veterans Network in 2020, I wanted to make sure there was enough support at M&S available to help those who left the Forces transition into civilian jobs. A challenge I faced when I left my position was losing my military ‘family’. I felt very isolated and wanted to ensure no one else felt this way. I am very proud of all the work that M&S has done and it’s great to see the business updating and re-signing its covenant ahead of Armed Forces Day.”