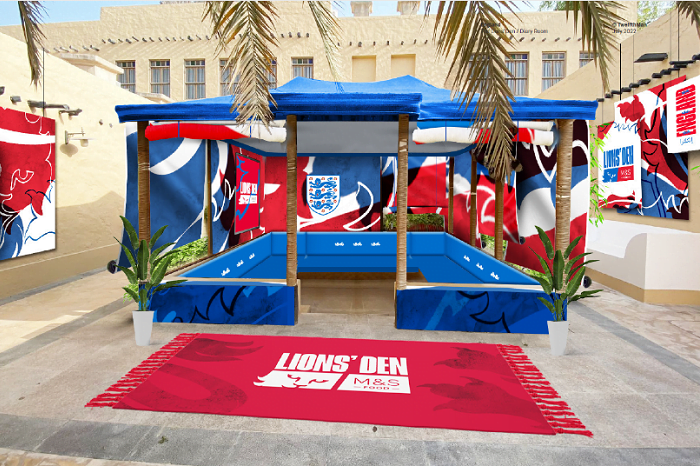 M&S Food has teamed up with the FA to bring the popular Lions’ Den live online series to World Cup fans from Qatar this winter. Hosted… View Article

M&S Food has teamed up with the FA to bring the popular Lions’ Den live online series to World Cup fans from Qatar this winter.

Hosted by Jos Denzel, this third series of the show will be broadcast live from the England camp every day from 17 November at 3pm GMT.

Viewers will be treated to exclusive behind the scenes content with players, manager Gareth Southgate, celebrity guests and fans.

They will also see players go head-to-head in making M&S smoothies based on their teammates’ characteristics and find out which grassroots team, or school, has won a training masterclass with the England team as part of the M&S Eat Well, Play Well competition.

Sharry Cramond, marketing director for M&S Food and Hospitality, said: “Our Eat Well partnership with the FA is only in its first few months and already we have seen some exciting activations – including our recent Eat Well, Play Well competition where children could win the chance to have a masterclass with the England team.

“The next step for us was how we could support the England team in Qatar – so sponsoring the Lions’ Den was an easy decision. Our partnership is all about using the power of football and the influence of some of the UK’s biggest footballing heroes to help families make healthier choices under the campaign banner ‘Eat Well, Play Well’.”