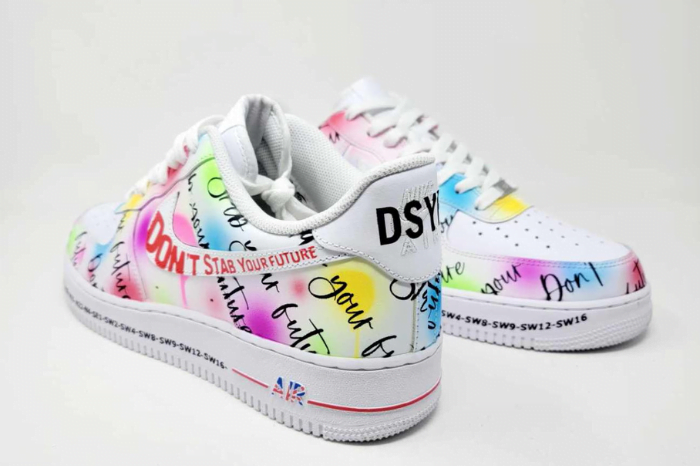 DSYF is an initiative supporting charities working to combat knife crime in the capital.  The duo customised a pair of Nike Air Force One’s with DSYF graphics which Durde wore on-field during Sunday night’s game (Indianapolis Colts vs Dallas Cowboys).

Design details included a list of the 14 London postcodes that have been affected by knife crime.

Don’t Stab Your Future is handwritten by Elba with a neon graffiti inspired color pop across the shoe to represent London’s urban landscape.  In a nod to the pair’s British roots the Air Force One logo is customised in the Union Jack colors of red, white and blue.

‘Don’t stab your future’ was Founded by Idris Elba in 2018 in response to an increase in fatal stabbings in London, ‘Don’t Stab Your Future’ is an initiative supporting charities who are working to combat knife crime.  The purpose-fashion brand DSYF aims to raise awareness by amplifying the message against knife crime and helping young people towards a better future.

During week 13 of the NFL, players, coaches, and staff across the league will be wearing custom-painted cleats (or footwear) highlighting different non-profit organizations and causes that mean the most to them. For the seventh consecutive season, the My Cause My Cleats initiative will bring awareness to important, player, coach and staff picked causes through the screens of millions across the globe.

Launched in 2016, the My Cause My Cleats initiative brings off-field causes, on-field throughout Week 13. Year after year, the player-led campaign fuels crucial conversations and puts these causes at the forefront. The causes players have chosen to support this year include topics such as preventing gun violence, tackling social justice, prioritizing mental health, raising awareness for individuals with disabilities and disability research, women’s health, and more.

Players combine forces with artists and cleat manufacturers each year to create these custom-designed cleats that showcase their causes in a way that resonates personally to the player, their fans and the cause.

Two pairs of the customized ‘Don’t Stab Your Future’ Nike Air Force One trainers have been signed by Elba and Durde and will be auctioned by NFL Auction, with monies raised donated to Big Kid Foundation to support the families of victims of crime.

Idris Alba commented: “Don’t Stab Your Future is a purpose-fashion brand. We create cool capsule collections (t-shirts and hoodies) and the monies raised are given to organisations and foundations that are working against knife crime in local communities.

“Sport is naturally an incubator for bringing likeminded people together. Why? Because sports appeals to the youth, whether you are watching it, or are part of a team, or you are playing it and you have a coach. It’s a natural incubator for learning, respect and personal growth. Everyone needs to be part of a family, a community, so they feel safe. Kids feel safe. And sport can help provide that.  When kids start being fractioned off here and there, they see gangs as a way of being included in something”.

“I went to an NFL game in London earlier this year and met The NFL Commissioner, Roger Goodell. He was incredibly warm and receptive and completely focused on hearing about what I was doing with ‘Don’t Stab Your Future’. As The Commissioner of one of the world’s biggest sporting organizations he knows that the intersection between youth and sport and the NFL is a precious space and one that can bring about change, and how using their platform can help kids to understand there is an alternative to violence.  He was keen for me to explore a collaboration with the My Cause My Cleats initiative.  Within three weeks myself, Aden and the Big Kid Foundation were working together.  The commitment from the NFL comes right from the top”.