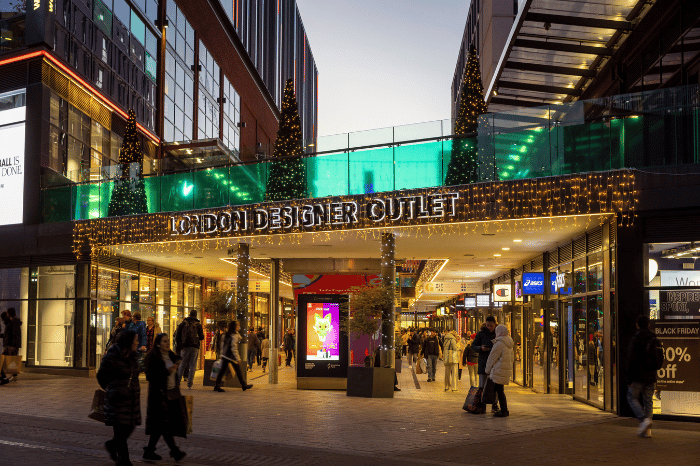 London Designer Outlet (LDO) ended 2022 on a high as price-conscious shoppers boosted revenues to make the December trading period the best one on record for the outlet centre.

The record-breaking month boosted trading performance across the entire Golden Quarter, which exceeded pre-pandemic levels according to the latest sales data.

LDO’s positive results demonstrate the appeal of outlets as the cost-of-living crisis takes hold and shoppers look for ways to save money on discretionary purchases.

The strongest day of trading was Boxing Day, with an increase of 89 per cent compared to Boxing Day the previous year, which was LDO’s second-best ever – only surpassed by 2018 when performance was boosted by the North London derby between Arsenal and Tottenham at the neighbouring Wembley Stadium.

Matt Slade, Retail Director at Quintain, said that it was encouraging to see strong sales figures despite external factors such as the rail strikes. “This has been a record-breaking December in more ways than one, demonstrating the significance of outlet centres as consumers tighten their purse strings amidst the cost-of-living crisis.

“It is encouraging to see that both the month of December as a whole and the period in between Christmas and New Year are the strongest on record, despite a slew of national rail strikes during the Christmas period. It is clear that people are increasingly seeking out greater value to save money on their Christmas shopping.”

London Designer Outlet sits at the heart of Wembley Park. The outlet offers aspirational and desirable brands such as flagship concepts from adidas, Nike, Calvin Klein and Tommy Hilfiger, alongside Kurt Geiger, Moss Bros and The North Face.